Oldonyo Lengai Trekking: OlDonyoLengai is referred to by the Maasai individuals as the “Mountain of God”, OlDoinyoLengai is absolutely dynamite. Rising gloriously from the Great Rift Valley floor to the tallness of 2890m, OlDoinyoLengai is the central dynamic fountain of liquid magma on a planet that ejects carbonatite magma. This sort of magma is remarkable because temperatures of these magmas are just around 500°C, about a large portion of the temperature of typical basalt magmas, and its magma streams with a consistency nearly as liquid as water.

Others portray Oldonyolengai Trekking as an experimentally valuable, geochemical place of worship; Oldonyo lengai is a significant physically requesting ascension. Its precarious incline makes it a test to scale just as to move down, and the daytime heat is unendurable. The best time to ascend the mountain is during the evening when the temperatures are lower.

This enables the climber to observe the stunning dawn at the summit and return before the scorching warmth kicks in. Contact us for Oldonyolengai Trekking.

Oldonyolengai is very steep and will take you about 6 hours to summit. However, it is well worth the hike and the midnight start time! Do your homework beforehand and make sure you will be prepared with a headlamp, jacket, gloves (highly recommend for the climb), and some comfy hiking boots. The hike down is honestly the hard part and takes the same amount of time as the hike up. You’ll get back to your car around noon. Very happy after you did this hike. It was something different than just going to Africa for the animals, the best part of your trip!

Serengeti National Park is undoubtedly the best-known wildlife sanctuary globally; unequaled for its natural beauty and scientific value, it has the most fantastic plains game in Africa.

The Serengeti National Park in Tanzania was established in 1952. It is home to the greatest wildlife spectacle on earth – the great migration of wildebeest and zebra. The resident population of lions, cheetah, elephants, giraffe, and birds is also impressive. There’s a wide variety of accommodation available, from luxury lodges to mobile camps. The Park covers 5,700 sq miles (14,763 sq km); it’s larger than Connecticut, with at most a couple of hundred vehicles driving around.

The Park can be divided into three sections. The popular southern/central part (Seronera Valley) is what the Maasai called the “Serengeti,” the land of endless plains. It’s classic savannah, dotted with acacias and filled with wildlife. The western corridor is marked by the Grumeti River and has more forests and dense bush. The north Lobo area, which meets up with Kenya’s Masai Mara Reserve, is the least visited section.

Two World Heritage Sites and two Biosphere Reserves have been established within the 30,000 km² regions. Its unique ecosystem has inspired writers from Ernest Hemingway to Peter Mattheissen, filmmakers like Hugo von Lawick and Alan Root, and numerous photographers and scientists, many of whom have put their works at our disposal to create this website.

The Serengeti ecosystem is one of the oldest on earth. The essential features of climate, vegetation, and fauna have barely changed in the past million years. Early man himself made an appearance in Olduvai Gorge about two million years ago. Some patterns of life, death, adaptation, and migration are as old as the hills themselves.
It is the migration for which Serengeti is perhaps most famous. Over a million wildebeest and about 200,000 zebras flow south from the northern hills to the southern plains for the short rains every October and November, and then swirl west and north after the long rains in April, May and June. Strong is the ancient instinct to move that no drought, gorge, or crocodile-infested river can hold them back.

Wildebeest travel through various parks, reserves, protected areas, and a variety of habitats. Join us to explore the different forms of vegetation and landscapes of the Serengeti ecosystem and meet some of their most fascinating inhabitants. 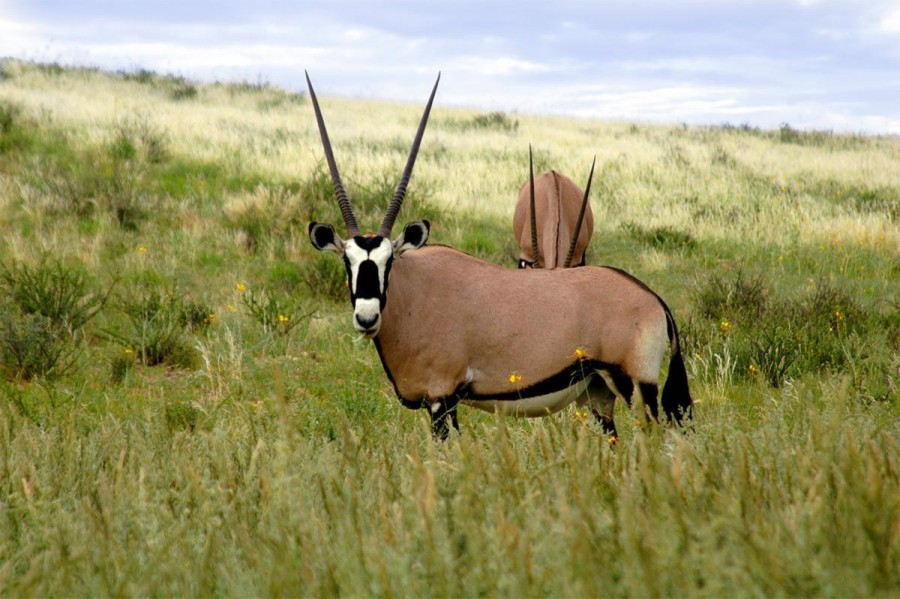 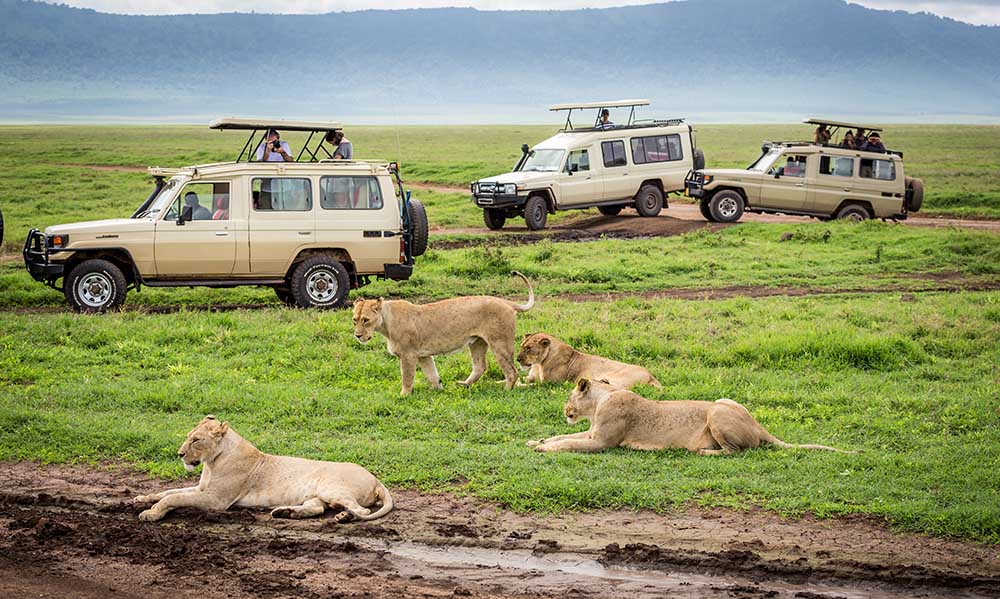 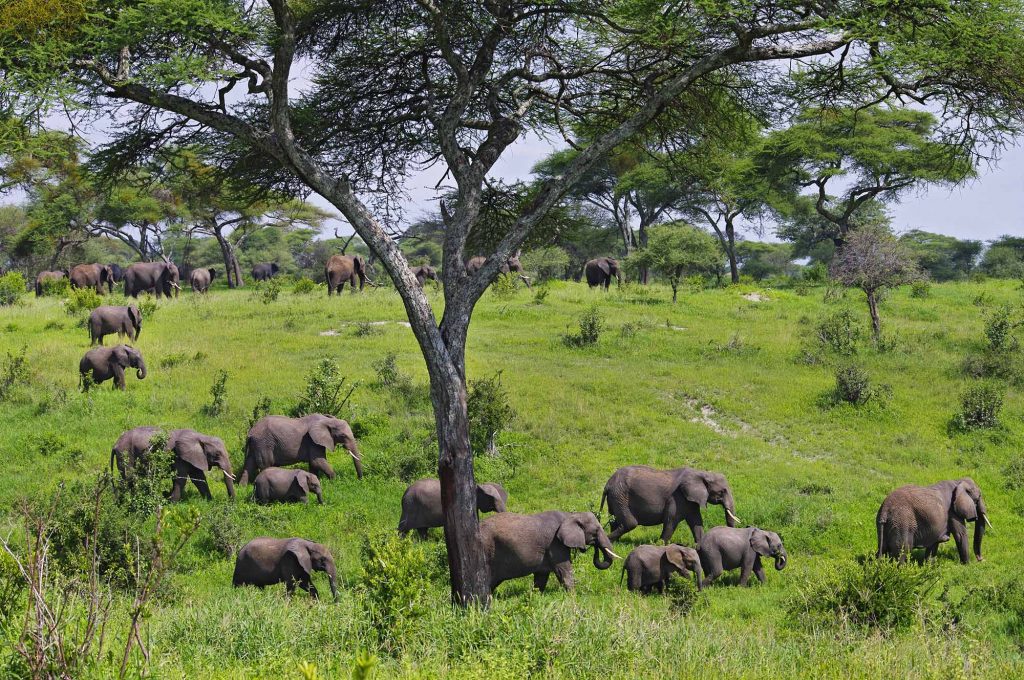 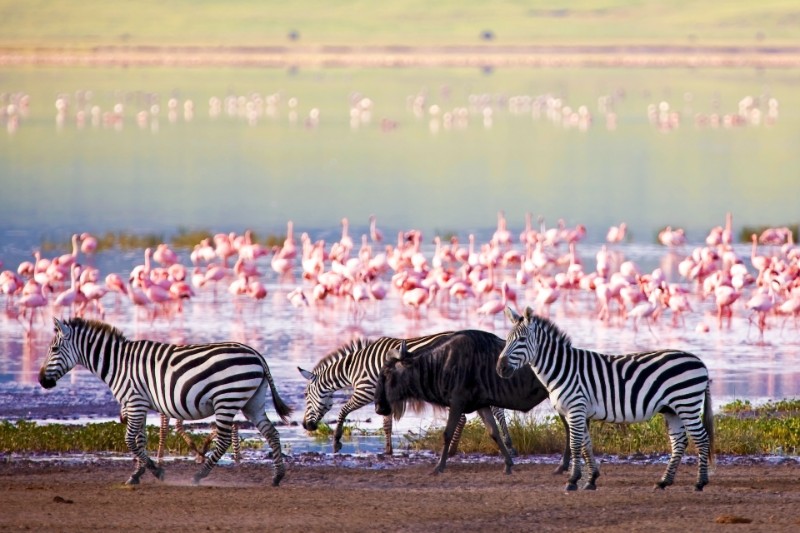 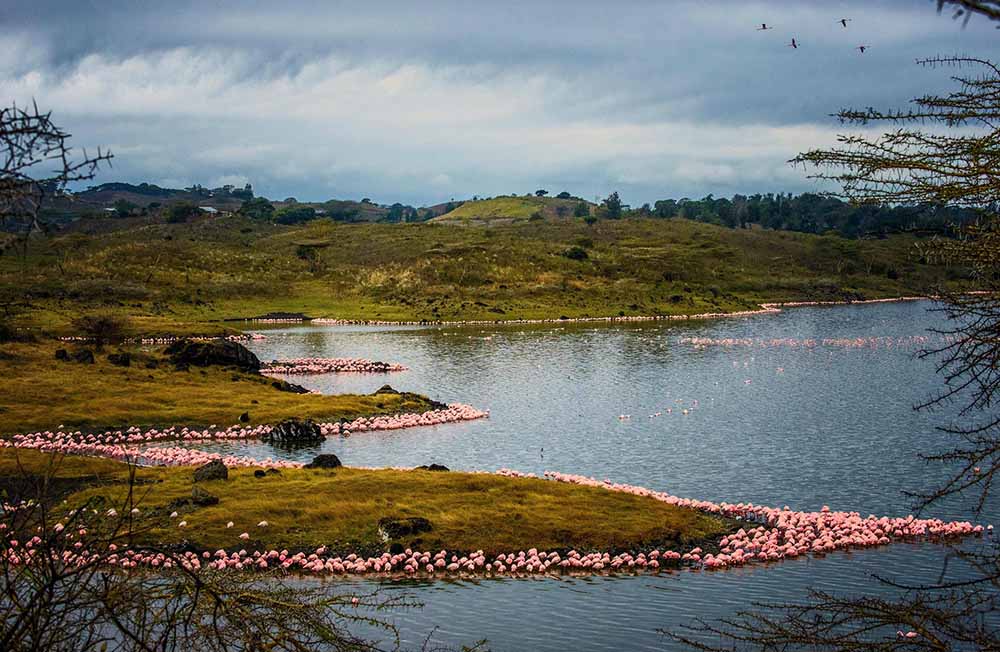 Set below the verdant slopes of the spectacular Usambara and Pare Eastern Arc Mountain Ranges and overseen by the iconic snow-capped peak of Kilimanjaro.

Mkomazi is a breathtaking virgin beauty exhibiting unique natural treasures and an immense sense of space – which adds to the fulfillment of high visitor’s enjoyment expectations – a much-needed bridge between northern circuit and coastal attractions.

Every day, thousands of people pass within a few kilometers of Mkomazi on one of Tanzania’s busiest highways. These and the northern circuit safari–goers are now most welcomed to discover the treasures of this wedge of hilly semi-arid savannah – home of large herds of giraffe, eland, hartebeest, zebra, buffalo, and elephant.

Mkomazi is a vital refuge for two highly endangered species, the charismatic black rhino and the sociable African wild dog, which were successfully introduced in the 1990s. Nomadic by nature, you might see wild dogs almost anywhere in the Park; however, the black rhino is restricted to a fenced sanctuary, ensuring their safekeeping for the enjoyment and prosperity of future generations.

Mkomazi supports several dry–country specialist species rare elsewhere in Tanzania; these include the spectacular fringe-eared oryx, with its long back–sweeping horns, and the handsome spiral-horned lesser kudu. Oddest of all is the gerenuk, a gazelle distinguished by its slender neck, bizarre alien-like head, and having the habit of standing tall on its hind legs as it stretches for acacia leaves that other browsers cannot reach.

A game reserve since 1951, this new National Park takes its name from a word from Pare tribe denoting “scoop of water,” referring to little water. It is a fantastic destination for birdwatchers, with more than 450 avian species recorded; among them are the dry–country endemics such as the cobalt–chested vulturine guinea-fowl.

How to get there

By road, Mkomazi is easily accessible via Same, which lies on the surfaced highway connecting Arusha to Dar es Salaam. The Park is also easily accessible on special arrangements through Njiro, Kivingo, and Umba gates. You can easily access the Park from the nearby tourist attractions in the Eastern Arc Mountains, The Coast, and Kilimanjaro Mountain. Charter flights are available to Kisima airstrip. 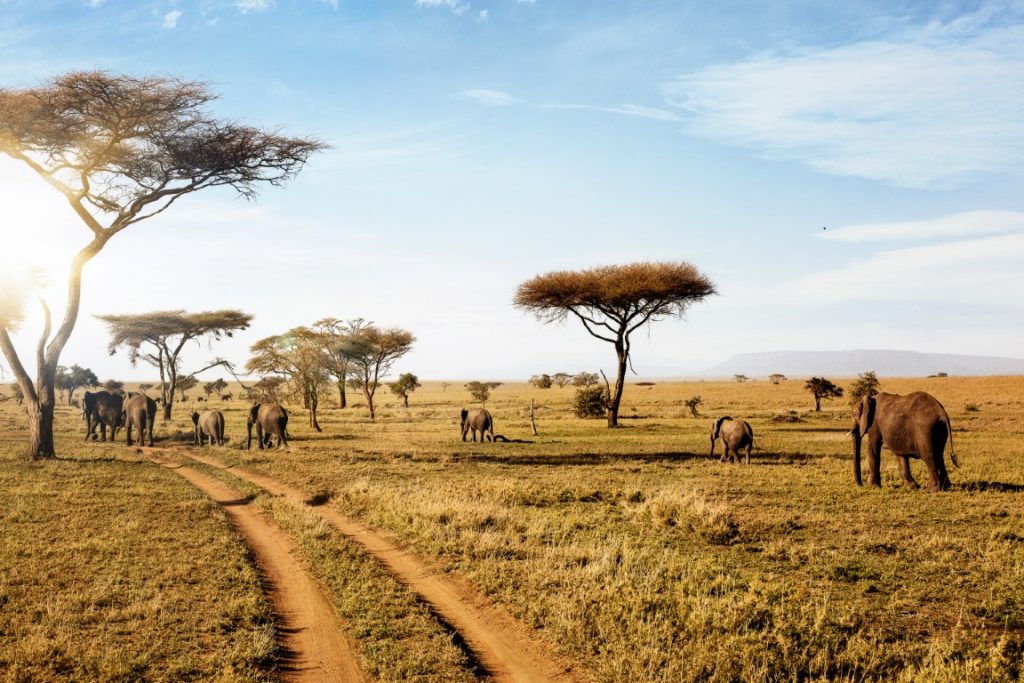 The extraordinary feature in Ngorongoro is a deep, volcanic crater and the largest unflooded and unbroken caldera in the world. About 20kms across, 600 meters deep, and 300 sq. kms in area, the Ngorongoro Crater is a breathtaking natural wonder. The Ngorongoro Crater is one of Africa’s most famous sites and has the highest density of wildlife in Africa. It is described as one of the ‘eighth wonders of the world.’
It guarantees excellent wildlife viewing in a genuinely mind-blowing environment. The Ngorongoro Crater is the world’s largest intact volcanic caldera; there is nowhere else in Africa quite like Ngorongoro!
The crater floor consists of several different habitats: grassland, swamps, forests, and Lake Makat (Maasai for ‘salt’) – a central soda lake filled by the Munge River. It is the most likely area in Tanzania to see the endangered Black Rhino, as a small population is thriving in this idyllic and protected environment. It is currently one of the few areas where they continue to breed in the wild. Your chances of encountering leopards here are also good and fabulous black-maned lions. Many flamingos are also attracted to the soda waters of Lake Magadi.
Ngorongoro Crater also offers cultural experiences in Maasai village trips. Part of the Ngorongoro Conservation Area has been to preserve the environment for the Maasai people who diverted from the Serengeti Plains. Essentially, nomadic people build temporary villages in circular homesteads called bomas. There are possibilities to visit for a couple of these now, as the indigenous people have opened up for tourists to explore. Here you can see how the huts are built in a strict pattern order according to the chronological order of the wives and experience what it must be like to rely on warmth and energy from a fire burning at the heart of a cattle dung dwelling with no chimney. These people have a great history as warriors. Even though they are no longer allowed to build villages inside the park, they continue to herd their cattle into the crater to graze and drink, regardless of the predators nearby.

Tarangire National Park has some of the highest population density of elephants compared to anywhere in Tanzania. Its sparse vegetation, strewn with baobab and acacia trees, makes it a beautiful and distinctive location visit. Located just a few hours’ drives from the town of Arusha, Tarangire is a popular stop for people traveling through the northern safari circuit on their way to Ngorongoro and the Serengeti.
Before the rains, droves of gazelles, wildebeests, zebras, and giraffes migrate to Tarangire National Park’s scrub plains, where the last grazing land remains. Breathtaking views of the Maasai Steppe and the mountains in the south make a stopover at Tarangire a memorable experience.

Located beneath the cliffs of the Manyara Escarpment, on the edge of the Rift Valley, Lake Manyara National Park offers varied ecosystems, incredible birdlife. Stretching for 50km along the base of the rusty gold 600-meter high Rift Valley escarpment, Located on the way to Ngorongoro Crater and the Serengeti, Lake Manyara National Park is worth a stop in its own right. Its groundwater forests, bush plains, baobab-strewn cliffs, and algae-streaked hot springs offer incredible ecological variety in a small area rich in wildlife and significant numbers of birds.
The alkaline soda of Lake Manyara is home to an incredible array of birdlife that thrives on its brackish waters. Highlights include thousands of pink-hued flamingos on their perpetual migration, as well as other large water birds such as pelicans, cormorants, and storks. Pink flamingo stoops and graze by the thousands of colorful specks against the grey minerals of the lakeshore. Yellow-billed storks swoop and corkscrew on thermal winds rising from the bluff, and herons flap their wings against the sun-drenched sky.
Lake Manyara’s famous tree-climbing lions are another reason to pay a visit to this park. The only kind of their species in the world, they make the ancient mahogany and elegant acacias their home during the rainy season and are a well-known but relatively rare feature of the northern park. In addition to the lions, the national park is also home to the largest concentration of baboons anywhere globally, which accounts for interesting game viewing of large families of the primates.

Arusha National Park (ANAPA) is a gem of varied ecosystems and spectacular views of Mt. Meru, the crater that gives the region its name

It is a popular destination for day trip visitors who are about to embark from the town of Arusha on longer northern circuit safaris. The small national park includes the slopes, summit, and ash cone of Mt. Meru, the Momela Lakes, Ngurdoto Crater, and the lush highland forests that blanket its lower slopes. Game viewing around the Momela Lakes is at a laid-back and quiet pace, and while passing through the forest many visitors stop to search for troupes of rare colubus monkeys playing in the canopy.

Climbing Mt. Meru or enjoying the smaller trails that criss-cross its lower slopes is a popular activity for visitors to Arusha National Park. The three-day trek to reach the crater’s summit is a quieter, and some say more challenging alternative than the famous peak of nearby Mount Kilimanjaro. Along the lower slopes, the paths to rivers and waterfalls create a relaxing day hike for visitors who don’t want to attempt the rather arduous climb. Ancient fig tree forests, crystal clear waters cascading from mountain streams, and a chance to spot colobus monkeys are the attractions and pleasures of Arusha National Park.